Government does not want to see me alive: Ramdev 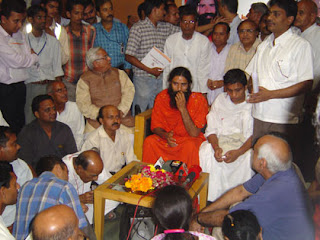 New Delhi, June 26 (IANS) Three weeks after he was bundled out, yoga guru Baba Ramdev Sunday returned to the capital to visit a woman who was critically injured in the crackdown on his agitation against corruption and accused police of a conspiracy to kill him. He also asserted that if any black money was found on him, it could be declared national property.
In new allegations that are sure to spark much outrage, Ramdev said that the police not only resorted to brutality, but also tried to rape and molest women during the post-midnight crackdown on protesters June 4.

This was the first visit by Ramdev, who heads the Haridwar-based Pantanjali Yog Peeth, to Delhi since the crackdown on his followers during his fast against corruption at the Ramlila Ground.

The visit also came amid the persisting standoff between the government and civil society activists over the Lokpal bill, with Ramdev, who fasted earlier this month against mounting corruption in the country, reiterating his charges against the government for not doing much against back money stashed abroad.

Profusely thanking his supporters at a press conference, Ramdev, blazing with anger, stressed that the entire world saw the injustice done to women and children at the crackdown and charged that police did not come to arrest him June 4, but to kill him.

He said he had come to Delhi on the eve of the 36th anniversary of the imposition of emergency and asserted that the situation 'was very much similar to the emergency'.

'At Ramlila Maidan, the police did not come to arrest me, they wanted to kill me. I won't give any evidence right now, because the case is pending with the Supreme Court,' said Ramdev.

Ramdev also lashed out at the way the government reacted to his protest, saying that if they suspected that he was doing something illegal, then why did four ministers go to the airport to meet him when he arrived and why did Prime Minister Manmohan Singh and Finance Minister Pranab Mukherjee write letters to him.

'Government doesn't wants to see Ramdev alive. If it's a mistake, then we'll commit such mistakes many times,' he thundered.

With the government trying to expose him over his thriving yoga business, Ramdev asserted that he was innocent. 'If the government finds any black money with me, they can declare it national property,' he said.

He dared the government to come clean on the issue of black money. 'If its not their money, then I ask, why are they afraid of declaring it as national property. I have uploaded all the details of our account in the website. Government should do the same,' he said.

After reaching Delhi, Ramdev rushed to G.B. Pant Hospital where the 51-yar-old Rajbala was being treated and invoked her condition as the government's tactic of repression against those protesting corruption and black money.

'Bhrastachaar and atyachar' (corruption and cruelty) was the new rallying cry of Ramdev, who said that his 'fight was not illegal' and asserted that and 'nobody can silence' him.

'Behen Rajbala is in very critical condition. Only a miracle can save her once the ventilator is removed,' he said. If she lives, she won't be able to walk again,' he said.

'This government is not only corrupt but also cruel. If I had not asked the people to stay calm, there would have been a pool of dead bodies,' he added.

Ramdev also alleged that there were attempts at rape during the midnight crackdown. 'There was attempt to rape the women and molestation... human rights were violated. 'We will give the proof related to this when the time comes,' he said.

Rejecting the charges of being the face of communal forces - an allegation made by some Congress leaders - he said it was a smear campaign. 'I am not the face of any party or organisation, I am not communal, I am only the face of billions of Indians,' he said.

He was asked to leave Delhi and banned from entering the city for 15 days. Ramdev continued his fast in Haridwar and Dehradun till June 12.

Delhi Police has in an FIR on the Ramlila Maidan incident, cited 'provocative' speeches made by religious and political leaders, including Baba Ramdev and Sadhvi Ritambara, as the main reason for canceling permission for the yoga guru's protest at Ramlila Maidan.
Posted by sumit at 4:48 PM