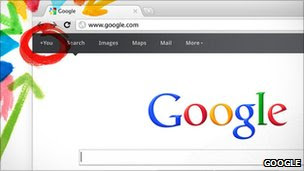 Online search giant Google has launched a new social networking website in its latest attempt to take on Facebook, which now claims more than 500m users.
Google+ allows individuals to share photos, messages and comments but also integrates the company's maps and images into the service.
It also aims to help users easily organise contacts within groups.
But some analysts say Google has simply reproduced features of Facebook while adding a video chat function.
Google, which handles roughly two out of every three internet searches in the US, has taken several stabs at Facebook in recent years.
But its previous efforts ended in failure, with both Google Wave and Google Buzz proving unpopular with users.
New functions The company is now boasting that four features in Google+ could help make the company a permanent player in social networking:
The current version of Google+ has only been released to a small number of users, but the company has said it soon hopes to make the social network available to the millions of individuals that use its services each day.
"Online sharing needs a serious re-think, so it's time we got started," Vic Gundotra, senior vice president of engineering at Google, said in a press release.
"Other social networking tools make selective sharing within small groups difficult," she added, taking what appears to be a jab at Facebook's recent grouping function.
But some analysts have said Google could have a difficult time converting Facebook devotees to their new social network.
"People have their social circles on Facebook - asking them to create another social circle is challenging," Debra Aho Williamson, principal analyst with research firm eMarketer, told the Associated Press news agency.
"The whole idea of a Google social network... they've been throwing stuff against the wall for several years and so forth nothing has stuck," she added.
In April, Google reached an out-of-court settlement with a US policy group over its rollout out Google Buzz, a previous social effort.
The legal action claimed Google deceived users and violated its own privacy policy by automatically enrolling all Gmail users in its Buzz social network without seeking prior permission.
Posted by sumit at 11:37 AM