China denies cyber war with US 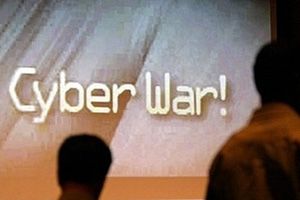 China denies cyber war with US.
BEIJING: There is no cyber warfare taking place between China and the United States, a senior Chinese official said, after weeks of friction over accusations that China may have launched a string of Internet hacking attacks.

The two countries might suffer from cyber attacks, but they were in no way directed by either government, Vice Foreign Minister Cui Tiankai told a small group of foreign reporters ahead of a meeting with US officials in Hawaii this weekend.

"I want to clear something up: there are no contradictions between China and the United States" on the issue of hacking, Cui said.

"Though hackers attack the US Internet and China's Internet, I believe they do not represent any country," he added.

Both countries were in fact already discussing the problem of hacking during their regular strategic consultations, Cui said.

"The international community ought to come up with some rules to prevent this misuse of advanced technology," he added.

The accusations against China have centred on an intrusion into the security networks of Lockheed Martin Corp and other US military contractors, as well as efforts to gain access to the Google email accounts of US officials and Chinese human rights advocates.

China has vociferously denied having anything to do with hacking attacks, saying it too is a major victim.

"Internet security is an issue for all countries, and it is a most pressing matter," Cui said.

"Of course, every country has different abilities when it comes to this problem," he added.

"The United States is the most advanced country in the world when it comes to this technology, and we hope they can step up communication and cooperation on this with other countries. We also hope this advanced technology is not used for destructive purposes."

The Internet has become a major bone of contention between Washington and Beijing.

This month, US Defense Secretary Robert Gates said Washington was seriously concerned about cyber-attacks and was prepared to use force against those it considered an act of war.

The latest friction over hacking could bring Internet policy back to the foreground of US-China relations, reprising tension from last year when the Obama administration took up Google's complaints about hacking and censorship from China.

Google partly pulled out of China after that dispute. Since then, it has lost more share to rival Baidu Inc in China's Internet market.

China, with more than 450 million Internet users, exercises tight control and censorship over the Web at home, and has strengthened its grip in recent months.

In February, overseas Chinese websites, inspired by anti-authoritarian uprisings across the Arab world, called for protests across China, raising Beijing's alarm about dissent and prompting tightened restrictions over the Internet.

U.S. Commerce Secretary Gary Locke said last week that the United States was looking into ways to craft trade countermeasures that treat curbs on Internet commerce as non-tariff barriers to trade.
Posted by sumit at 4:02 PM