Team Anna apologizes to media, says it will end agitation if such incident happens again 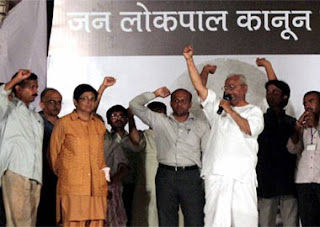 New Delhi: In a fresh development on day 3 of Team Anna's indefinite fast, anti-corruption crusador Anna Hazare on Tuesday apologized to the media for manhandling them as TV Editor's Association demanded apology for the scuffle that took place on Monday night.
Team Anna member Arvind Kejriwal, who is also fasting, apologised for the misbehavior with media but sought to blame media house owners, saying they have to decide whether they are with the country or with corrupt people.
READ MORE: Kejriwal’s health condition worsens
While addressing the media, Anna Hazare said that he regrets the scuffle broke out between its Team Anna supporters and the media at Jantar Mantar on Monday night.
Taking the matter seriously Hazare further said that he will end the agitation if such thing happens again.
Anna Hazare also requested the anti-graft supporters to adhere to non violent ways.
A scuffle broke out between Team Anna supporters and mediapersons last night at Jantar Mantar, where Hazare is on an indefinite fast. Team Anna member Shanti Bhushan's allegation that media was not projecting the protest in right light allegedly led to the brawl.

The Broadcast Editors' Association (BEA) had condemned the incident and demanded an apology from Team Anna.

"If you indulge in violence, remember that the government can crush us in two days. They have the strength and laws to do that. In future, if these things happen again, at that moment I will call off this agitation. I don't approve of this. Let media do their work. Don't bother about what they do," he said.

He said if the media coverage is not the right way, they should not blame media but should introspect and see if there is any problem with the activists that such reports are coming. "It's wrong to blame media. I regret that some people have misbehaved with the media," he said.

Apologising to the media, Kejriwal said the protest should continue with calmness and non violence. "We cannot tolerate such behaviour," he said.

However, he said media house owners need to make their own choices whether they want to support government in their wrong deeds or want to join the mission of service of nations.

Another Team Anna member Manish Sisodia said they were ashamed of what happened on Monday night. "Our fight is not with the media," he said.

Meanwhile, doctors advised hospitalisation of Kejriwal and Gopal Rai, who were fasting for the past seven days, as their health deteriorated.

However, both the activists refused to do so.

Kejriwal said they were at the protest to sacrifice their lives not to go to hospital.

"I am warning the government not to try to arrest us and force us to go to hospital. We are not cowards who will give up because of health problems," he said.
Earlier, taking the controversies seriously, Team Anna member kiran Bedi on Tuesday indicated upon rethinking its strategies.
Posted by jyoti at 2:14 PM