Wealth of one lakh crores, sixth vault open for fear of ill omen! 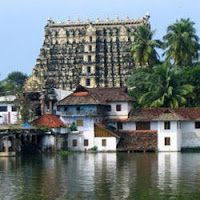 Thiruvananthapuram. The sixth and last of the famous temple in Kerala Pdmnabswami could not open the crypt. Involved in estimating the amount of the treasures of the temple staff have had to stop work. So far, one lakh crore has opened five cellars and precious stones, gold and silver reserves are gone. It is believed that the ominous possibility that the basement had to stop to open the work.
To assess the treasures of the temple say that the sixth and last team opened the front door of the cellar, but it remains within a wall of iron. According to temple records the last time the vault was opened 136 years ago.
Opening the treasures held in the cellars of the temple and its list to assess the Supreme Court headed by retired judge NM Krishnan has made a seven-member team.
Speaking to reporters, he said, "some technical problems to open the sixth basement. Friday's meeting we will discuss all its aspects. " He said that before opening the basement will require technical expertise.
The Temple of the Travancore royal family maintains that the people opening the basement can be a bad omen. Associated with the royal family sources said many of the personalities involved in the temple and the sixth snake remains at the main entrance to the basement. Source said, "It is clear that the door should not be opened, because opening it could be a bad omen. I do not think that the investigation team because it can open many people's faith is attached to the temple. " Another source is a tunnel down to the basement and get into the sea. Your talk The wealth of the temple, so many, this rule has yet to take the veil. With such a treasure in a temple indicate what? Write your opinion in the comment box to share with readers worldwide. Readers will be responsible for any objectionable comments.
Posted by sumit at 11:50 AM