Harry Potter's invisibility cloak may still be fantasy, but researchers are moving closer to making things disappear.
At the Royal Society's Summer Science Exhibition in London, scientists make visitors gaze in amazement as small balls vanish before their eyes.
This "invisibility stand" is one of the 22 projects being presented to the public this year.
Among them are special glasses that help blind people "see", tanks to capture sunlight and the so-called "smart traffic control".
Royal Society president Sir Paul Nurse told BBC News that the exhibition was a showcase not only for British science, but for the society in general.

If one day, I could have an invisibility cloak just like Harry Potter, that'd be fun!”

Keil Smith Pupil, London
"We have a constant evolution of our understanding of the world, and it's important to see how science can be applied for human good, how it can be used to improve the quality of life, to improve health and to drive economic growth," he said.
Invisibility cloak The project involving "invisible" materials - called metamaterials - has attracted a lot of attention, with school children taking turns to hear the scientists explain the nature of the research.
Metamaterials are materials unavailable in nature, in which the microstructure is changed to create unusual properties such as bending of electromagnetic waves.
"I've never quite seen anything like it before; and if one day, I could have an invisibility cloak just like Harry Potter, that'd be fun!", said 13-year-old Keil Smith. 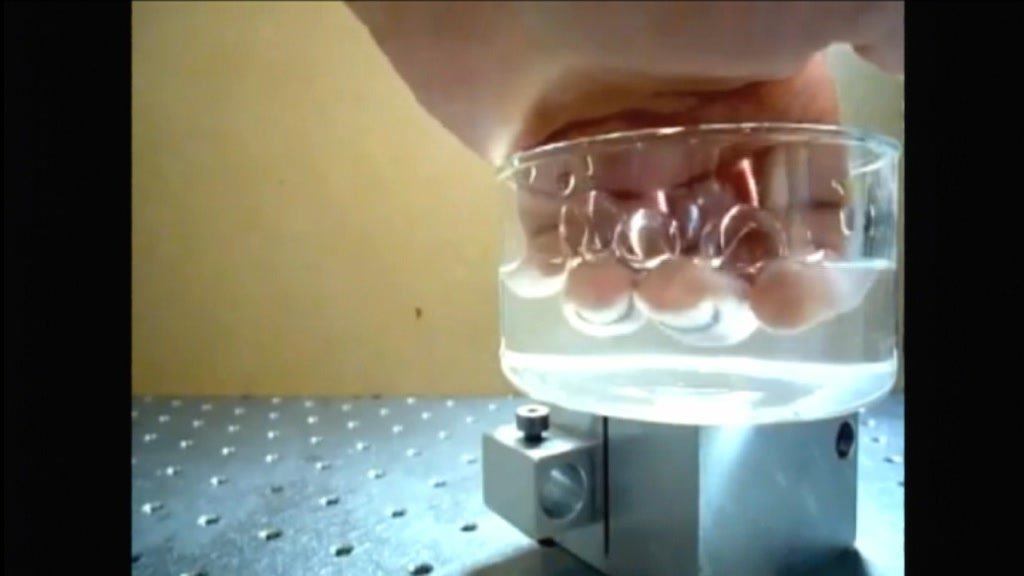 Click to play
Footage provided by the Royal Society shows an 'invisibility' demonstration
Professor Ulf Leonhardt of the University of St Andrews, one of the project leaders, told BBC News that in future, this technology could be applied in the areas of communications, wireless energy transfer, sensors and security.
He said that the "magic" illusion of disappearance stems from bending light in an unnatural way.
"In the 'cloaking' device, you bend light around something so that you don't see the object, but you also don't see that the light has been bent - it enters the device in a straight lines and it also leaves the device in the same direction in came from, as if nothing had happened to it," he said.

We've been testing in the wind tunnel, and we found out that the more paddles the rotor has, the more efficient it becomes”

Eve Winsper Pupil, Alcester High School
"This makes objects undetectable and therefore invisible."
Besides the "cloaking" device, the team also demonstrated how small balls made of sodium polyacrylate literally vanished as they were immersed in water.
Tom Philbin, also from the University of St Andrews, explained that the balls had the exact same optical properties - the same refractive index - as water.
"So if you have two materials that are different like these balls and water, but their refractive index is the same, then as far as light is concerned, they're exactly the same thing," he said.
Mr Philnin said that H.G. Wells used these principles in his classic novel "The Invisible Man" - his character made his refractive index exactly the same as air, so that light could not tell him apart from the air and he thus became invisible.
"But to do that, you'd have to change your entire composition, to make your refractive index the same as air, which you can't really do," added the scientist.
Robots' faces At another stand, visitors learn about facial recognition technology - and how it can be applied to robots. 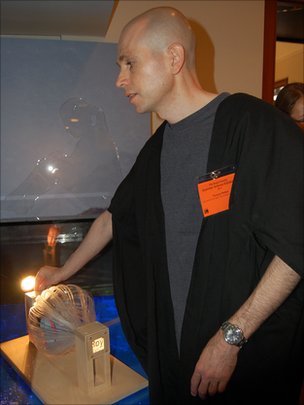 Tom Philbin demonstrates the cloaking device, where light is bent so as to "hide" the object inside
The team behind the project seeks to understand how the brain perceives faces, and then "teaches" robots to recognise the emotions of people they interact with.
Professor Alan Johnston from University College London told BBC News that there were a number of places where robots and people co-existed in social environments.
For instance, he said, in Scotland one robot helped in an office, and in Lisbon, Portugal, robots were teaching school children to play chess.
"It's important for these machines to recognise how to act socially - to see when people are looking happy or sad," he said.
"And our robots are able to understand your expressions, to then change their faces accordingly.
"They robots can smile, look surprised, and do a range of different things."
Old idea, new ways Wind power has long been viewed as an important source of renewable energy - but scientists are now trying to use the latest technologies to improve turbines that have existed for decades.
Researchers from Coventry University have teamed up with pupils from Alcester High School to improve the efficiency of a wind turbine called Savonius that was developed at the dawn of the 20th century.

If you warm two metal plates up by rubbing your hands, getting friction and thus generating heat, it then will be turned into electrical power”

Dr Patrick Joseph-Franks National Physical Laboratory
The turbine generates electricity by converting rotational energy produced when the wind blows on the blades of the rotor, makes them turn, and then turns a shaft.
This particular turbine has always been considered a poor electricity generator - but the team has managed to make it more efficient by increasing the number of fins on the rotor.
"We've been testing in the wind tunnel, and we found out that the more paddles the rotor has, the more efficient it becomes, as there's more surface for the wind to blow against - and it can produce more electricity," said 13-year-old Eve Winsper.
Steve Sarson, head of technology at the school, explained that they used computer-aided design and manufacturing techniques to turn something that has been first developed a long time ago into a much better device.
'Wasted' energy Another energy-harvesting technology has also made it to this year's exhibition.
But this time, scientists from the National Physical Laboratory have researched ways to harness energy that is otherwise wasted - dissipated as vibration, motion, heat or sound. 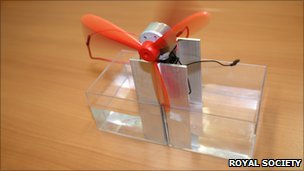 One of the ways to harness energy is by using a thermoelectric generator
Once captured, this energy is then transformed into electrical power.
One of the researchers, Dr Patrick Joseph-Franks, explained that there were several ways of doing so.
"One is a thermoelectric generator - if you warm two metal plates up by rubbing your hands, getting friction and thus generating heat, it then will be turned into electrical power," he said.
"The second device is somebody pedalling on a bicycle and it is connected to a generator, and the third system is a piezoelectric device - if you squeeze it or bend it, you put a strain on it and it produces an electrical signal and you can capture that."
None of these technologies are new, but today, it is becoming more and more economically important to capture energy instead of wasting it.
And some companies are already doing it.
Car manufacturer Volkswagen, for instance, is using a piezoelectric generator connected to the exhaust to capture the heat produced by a car's engine, said Dr Joseph-Franks.
And in Tokyo, power-generating mats have been installed under the floors at two train stations - they capture the vibrations of the thousands of commuters and then transform this energy into electricity.
Posted by sumit at 2:28 PM