Sangakkara in trouble over his Lord's speech 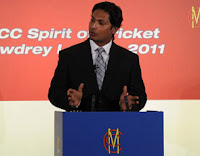 Colombo: Former Sri Lanka captain Kumar Sangakkara is likely to be called for an explanation by the country`s Sports Minister Mahindananda Aluthgamage over his MCC Spirit of Cricket lecture delivered at Lord`s, where he launched an attack against his own cricket establishment.

According to the state news agency `Lankapuwath`, Aluthgamage had called the newly elected interim committee of Sri Lanka Cricket (SLC) to examine the remarks made by the former captain.

Sangakkara in his speech on Monday in London, accused Sri Lankan cricket administrators of causing "rift, ill-feeling and distrust" in the side.

Sangakkara slammed SLC for corrupt practices and hinted that he was forced to step down from captaincy after only two years at the helm.

Sangakkara, who resigned after the World Cup defeat to India in April this year, said with Sri Lanka`s 1996 World Cup victory, the cricket administration in the island had changed "from a volunteer-led organisation run by well-meaning men of integrity into a multimillion-dollar organisation that has been in turmoil ever since".

Without taking names, Sangakkara voiced his concern at the direction the sport in Sri Lanka is now heading.

"Players from within the team itself became involved in power games within the board. Officials elected to power in this way in turn manipulated player loyalty to achieve their own ends. At times, board politics would spill over into the team causing rift, ill feeling and distrust," Sangakkara had said.

Sangakkara felt lack of accountability has been the bane of Lankan cricket which has left the board without consistent administration.
"Accountability and transparency in administration and credibility of conduct were lost in a mad power struggle that would leave Sri Lankan Cricket with no consistent and clear administration.”
"Presidents and elected executive committees would come and go; government-picked interim committees would be appointed and dissolved," he said.
Posted by sumit at 1:18 PM