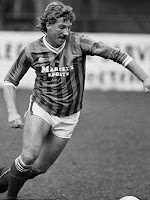 When Australian women cricket team’s all-rounder Ellyse Perry got selected in national squad for the FIFA Women’s World Cup in Germany, many of us must have wondered about and saluted her for her talent, skill, perseverance and guts to play two different sports at the highest level.

However, she is not the one-off kind. There are plenty of sportspersons around the world who have achieved the ‘double’- playing two different sports at the competitive level.

Zeecric.com’s Biswajit Jha writes about some players who excelled in more than one sports during their playing career:

Denis Compton (England): One of the legends of cricket, Dennis Compton played 78 Tests for England between 1937 and 1957. A superb personality who, by virtue of his talent, turned cricket into a national symbol in England after the Second World War, played 78 Tests for England scoring 5807 runs at an average of 50.06 with 278 being his best. In first class matches, his achievement is amazing to say the least. He amassed 40,000 runs, and also took 622 wickets with his Chinaman bowling.

To add to his legend, Compton was also an equally able footballer. He began his career at non-league Nunhead during the 1934–35 season before joining the famous England football club Arsenal as a winger. He helped Arsenal win the League in 1948 and FA Cup in 1950. Though knee injury forced him to play only 60 official football matches, he represented England in Wartime for 12 outings.

Though for cricket he is remembered most, his achievements on the other sporting fields were equally awe-inspiring. He represented England both in cricket and football. As a Southampton FC player, he helped his team reach the FA Cup final. As a long jumper, he also made his mark equaling the then world record for long jump.

His cricket career consisted of 394 first-class matches and 26 Tests. He scored over 30,000 runs in first class cricket.

Vivian Richards (West Indies): A fierce hitter of the cricket ball and a run-machine of his generation, Sir Vivian Richards will be remembered for his fearless batting in any condition and against any opposition. In the 121 Tests while playing for West Indies, he scored 8540 runs with 291 being his best. Not many people know that the destroyer of many a bowlers’ cricket career also played football at the highest level. He played international football for his country Antigua when he appeared in the qualifying matches for the 1974 World Cup.

Jonty Rhodes (South Africa) : The legacy of Jonty Rhodes will linger throughout the annals of cricketing history for his excellent fielding. A handy batsman in all forms of the game, he made fielding an art, a showpiece during the 1990s as a South African cricketer. And you will be surprised to know that he was also a successful hockey player.

He won several international caps as a hockey player and was a part of the South Africa’s failed attempt to qualify for the 1992 Olympic Games. Though he also took part in the trial matches for 1996 Atlanta Games, a hamstring injury prevented him from playing Olympics for South Africa after his country qualified for the hockey competition.


Jeff Wilson (New Zealand) : Latest in the list of the players who played more than at the international level, Wilson was a New Zealand all-rounder who made his debut against Australia in ODIs in 1993. He again made a surprising comeback twelve years later in 2005 but could not excel. In between the two outings he represented the Black Caps in the rugby fields, becoming an All-Black legend, scoring 44 tries in 60 internationals, before retiring at 28. Though his cricket achievements were limited, there is hardly any doubt that he is the one of the rarest all-round sportsmen of modern era.

Ian Botham (England) : Botham was no doubt the best all-round cricketer England has ever produced. His exploits with both bat and ball won England many a matches in 70s and 80s. He scored 14 centuries and took 383 wickets in Tests, an achievement which makes him one of the best in the world.

Botham was also an equally talented footballer as well. His had an early age dilemma of whether to choose cricket or football as the professional sports. We will never know how he would have performed at the highest level in football, but he did play for football club Scunthorpe United in March 1980 in an effort to get fit after an injury lay off. He played as a centre half and made 11 appearances in the Football League.

Ric Charlesworth (Australia) : Most of the hockey-loving people in India would be surprised to know that this former coach of Indian hockey team was a successful cricket player and coach, too. He played cricket for Western Australia and was a member of the Sheffield Shield winning teams in 1972-73, 1976-77 and 1977-78, and came pretty close to winning a Test cap at a time when Kerry Packer divided the cricket world with his World Cricket series in the late 1970s.

However, it was in hockey that he excelled most, playing 226 matches for Australia. He took part in four Olympics, captaining the side in the 1984 edition.

He used his skills to good effect in the coaching field, guiding different hockey as well as cricket teams around the world. Before joining Indian hockey team as a technical director, he was serving as New Zealand Cricket's high performance manager.

Chuni Goswami (India) : Subimal Goswami, popularly known as Chuni Goswami, is hailed for his great achievements in the arena of football. He played football for India successfully in the international arena and was a member of the India’s Olympic football team in 1956.

He even led the country’s football team to the Asian gold medal in the 1962 Asian Games. Despite his tremendous achievements with the bigger ball, he was no mean cricketer. After retiring from football, Goswami, an all-rounder, concentrated on his cricket and led Bengal to two Ranji Trophy finals. Though modern generation is hardly aware of his cricketing achievements, he is definitely India’s most accomplished all-round sportsperson of all time.
Posted by sumit at 1:10 PM