"No one could play for just a century, can not believe it ' 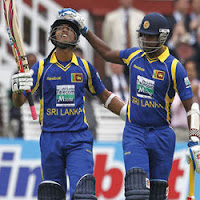 The Sri Lanka won that match by 6 wickets. Sri Lankan batsman Angelo Mathews Chandiml fellow not out batsman in the match of the century were not making runs to get.

British newspaper The Mirror quoted the cook, "I've never seen before. Was clearly understood that they are doing. They have the right to do so but - your team to do it damage could be. "

Sri Lankan captain Tillakaratne Dilshan on the issue said, "Before I got very angry at this act of Mathews and Chandiml. But they are still learning the game and match at Lord's is special, so he sat up."

The Asian team to play for personal achievement is identified. Has also seen a glimpse of the Lord.
Posted by sumit at 12:16 PM