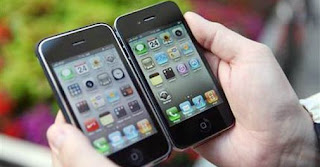 The latest version of the iPhone is thinner, lighter and longer, but does that make it better too? We take a look at what's new in the world's favourite phone.

The advanced, smartphones that we use today are a gift from Apple. No, Apple didn't design all of them, but back in 2007 it gave the industry a masterpiece that managed to change the dynamics for good. It set new benchmarks, both in terms of the hardware and software. It won't be wrong to say that if Apple hadn't launched the iPhone, we could still have been been using the old 2.4-inch displays with alphanumeric keypads in feature phones and resistive (stylus driven) displays in business phones.

Yes, there were apps for Nokia and Windows phones then too. But we had to search websites like getjar.com to download them. Apple streamlined this by introducing App Store, a onestop shop for downloading all free and paid apps.

Apple hasn't looked back since. Unlike other players, the company brings out just one new smartphone every year and manages to keep the competition on their toes. The recently launched iPhone 5 with a bigger display, faster processor, fine camera and better battery life is single-handedly trying to keep the Android onslaught at bay. Here is a look at the new features in this iconic phone- and where it falls short.

HARDWARE
There has always been something special about the iPhone. While the basics still remains the same, the iPhone 5 has got itself more powerful innards, gained some height and shed some weight.

DESIGN: The iPhone 5 is 18 per cent thinner and 20 per cent lighter than its predecessor. It is 7.6mm thin, approximately 1.7mm sleeker than the iPhone 4S. Living up to the competition of having bigger, better displays, the iPhone 5 has a 4-inch display, achieved by making the screen longer. Apple did not want to increase the width beyond 58.6mm as that would have made it harder to use with a single hand. The 4-inch screen means more real estate, enough to create space for another row of icons. However, the new, thinner display is bright and offers more clarity. The phone has also got an aluminum back.

LIGHTNING CONNECTOR: In the effort to make the iPhone thinner, Apple has replaced its proprietary 30-pin connector with the new eight-pin digital connector. This new connector is advanced and reversible, which means the cable can be plugged in from any side. To make the new iPhone compatible with the existing accessories, Apple has also launched a special adapter. PROCESSOR: Replacing the dual-core A4 processor on the iPhone 4S is the A6 processor. Apple hasn't shared much details about the A6 chip, but it claims the iPhone 5 will be 2x faster and will offer 2x graphics performance over its predecessor. The iPhone 5 comes prepared for graphic-heavy games and for extra power needs.

CAMERA: The 8MP iSight camera of the iPhone 4S was just fantastic. Instead of increasing the megapixel count, Apple claims to have enhanced the camera itself. It captures photos 40 per cent faster than its predecessor and has better low-light performance and improved noise reduction. It also supports Panorama that allows user to shoot up to 240 degrees in a single motion. For capturing 1080p videos, video stabilisation has been enhanced. Lastly, users will be now able to click images even as they are capturing videos. NANO-SIM: Unlike the iPhone 4 and iPhone 4S, the new iPhone does not support a microSIM card. Apple has stepped ahead to include a new technology by using a nano-SIM slot. This new SIM card is not only small but is 15 per cent thinner than the regular SIM cards.

LTE: Like the new iPad, the iPhone 5 supports LTE wireless technology. But it won't be compatible with 4G LTE networks that are coming up in India.

SOFTWARE: iOS 6
The iPhone 5 will run Apple's new iOS 6 operating system. iOS is easier to use as unlike Android and other platforms there is no hidden menu or options. All apps are laid out scattered across the homescreens and users can make folders just by dragging and placing the app icon over another. The biggest plus point of owning an Apple device is the instant availability of updates. The minute Apple rolled out the iOS 6, the update was available to all Apple users across the globe, irrespective of the device and country. Here is what the iOS 6 brings to the table.

FACEBOOK INTEGRATION: Social network integration is a must in any smartphone today. After integrating Twitter in iOS 5, Apple has now opened the doors for Facebook integration. Now users will be able to share photos, update status without having to log into the app.

MAPS: With iOS 6, Apple has dropped Google Maps and replaced it with its own Maps. Maps offer turn-by-turn navigation and a new 3D feature called 'Flyover'. However, unlike Google Maps, the new mapping software lacks details and features. It does not support turn-by-turn direction in India.

SIRI: The intelligent voice assistant, Siri, was the distinguishing feature on the iPhone 4S. With the iOS 6, Siri has become smarter. It has learned new tricks and can now launch apps, present score cards, search for movie tickets, and book tables at restaurants. It can even send a tweet and post on Facebook. However, some of these features will not work in India.

VIP EMAIL: Thanks to the deluge of junk emails we often overlook important mails. Not any more, as iOS 6 lets users set up a VIP list. Users can now also have different signatures for different accounts with the new Mail app.

FACETIME OVER 3G: Till now, video chat using FaceTime was only possible if both the parities were on Wi-Fi. But on iOS 6, it works over cellular network as well.

MESSAGE REPLY & DND: Basic features like decline an incoming call with a text message, set a callback reminder or create a preset message have been added to iOS 6. The Do Not Disturb feature allows users to set up a time for incoming calls to be silenced. One can also create a list of people that can still continue to reach you overriding the DND settings.

APP STORE
Till now, Apple iPhone users always had an edge over competitors, at least on the application front. For past five years, the phone's display had stayed at 3.5 inches, as a result of which all apps listed on the App Store were compatible with the iPhone 4S. But given the increased screen size of the iPhone 5, users and developers could face some challenges. While the existing apps will run flawlessly, there will be an emplty black space on the top and the bottom, restricting users from enjoying full benefits of the bigger display. But once the developer updates the app, things will be back in place. This can take some time. "The change depends on the type of app," says Binay Tiwari, Head, Global Marketing, Vserv.mobi. "Some of the 'table' structure layout type apps will get updated relatively easily, while the more graphics intensive games may need a re-design. The app ecosystem is a competitive one and Apple rewards developers that support their latest hardware by featuring their apps on the App Store."

SERVICE
Like its hardware, Apple has one of the best service support structures as well. While Apple offers international warranty for its Mac lineup along with the iPod and iPad, things are a bit different for iPhone, which comes with a country-specific warranty. In case anything goes wrong within the warranty period, just take it to the service centre with the proof of purchase
Posted by jyoti at 12:57 PM