Was it murder? Was it suicide? 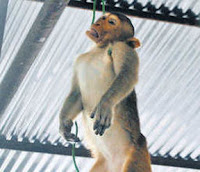 Jabalpur: The students and the staff of the medical college were in for a shock on Sunday when they saw a monkey hanging from the ceiling here on Sunday.

According to anti-poaching incharge, R K Kumhare, they got the information about a monkey hanging from the ceiling in one of the halls on the third floor of the medical information.

He said that when they reached spot they saw a monkey hanging from the ceiling and atleast 4-5 monkeys surrounded him as if mourning his death.

What made the matters worse was that when they tried to remove the monkey and take him away, the other monkey got aggressive and did not let the officers take the dead monkey. The team had a hard time removing the dead monkey from the campus.

It is rumoured that some monkeys attacked this monkey and later hanged him.
Posted by sumit at 11:44 AM