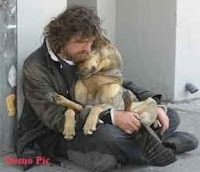 London: Man's best friend - the dog - was surprisingly bred for meals some 10,000 years ago.
While this may not shock people in Korea where dog meat is a delicacy, scientists found a bone fragment from what they are calling the earliest confirmed domesticated canine in the Americas.
From this, they have concluded that the animals were bred to be eaten as well as to serve as hunting dogs and even pets. However, it remains unknown whether the dogs were eaten out of necessity, the American Journal of Physical Anthropology reports.
Samuel Belknap III, University of Maine graduate student, came across the fragment while analysing a dried-out sample of human waste unearthed in south-west Texas in the 1970s, the Daily Mail reports.
A carbon-dating test put the age of the bone at 9,400 years, and a DNA analysis confirmed it came from a dog, not a wolf, coyote or fox, Belknap said.
The fragment was found deep inside a pile of human excrement and was the characteristic orange-brown colour that bone turns when it has passed through the digestive tract.
It provides the earliest direct evidence that dogs - besides being there for company, security and hunting - were eaten by humans and may even have been bred as a food source, he said.
Belknap wasn't researching dogs when he found the bone. Rather, he was looking into the diet and nutrition of the people who lived in the Lower Pecos region of Texas between 1,000 and 10,000 years ago.
"It just so happens (that) this person who lived 9,400 years ago was eating dog," he said.