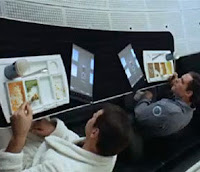 Sydney: Hollywood filmmaker Stanley Kubrick designed the first ever iPad, and not Apple Inc, says rival company Samsung in a bizarre patent suit that cites the director's "2001: A Space Odyssey" as evidence, according to a media report.
The two companies are "suing each other all over the world" for patent infringement, after Apple accused Samsung of "blatant copying" of its products, the Sydney Morning Herald reported.
Apple won a temporary injunction against Samsung's Galaxy Tab 10.1 in Europe. In Australia, it forced Samsung to agree not to sell the device until it can satisfy Apple that it does not infringe on its iPad patents.
A patent case against the Galaxy Tab is also running in the US and Samsung has filed its reasons as to why Apple should not be granted an injunction.
One of Samsung's exhibits was a still image and a YouTube clip taken from Stanley Kubrick's 1968 film "2001: A Space Odyssey". The clip shows two astronauts eating while at the same time using what appear to be personal tablet computers, the report said.
Samsung says this was an example of "prior art" for the general design of the iPad.
It also cited a scene from the 1970s British TV series "The Tomorrow People", which appears to depict a tablet computer.
Consultant and blogger Florian Mueller, who first uncovered the Kubrick reference, said it would be "amazing" if the court agreed with Samsung.
Mark Summerfield, a senior associate with a Melbourne intellectual property law firm, believes Samsung "may have a case".
"Generally science fiction is not legitimate prior art to a utility patent, because it does not inform the public how to make the fictional apparatus," said Summerfield.
But there was no reason why science fiction could not be "invalidating prior art" to a registered design, he said.
"For example, if I were to copy the Star Trek communicator as a novelty mobile phone, I would have no right to claim a monopoly in that design. I did not devise it myself," he said. "I think that Samsung probably has a viable defence here."
(Image: Youtube)
Posted by sumit at 10:08 PM