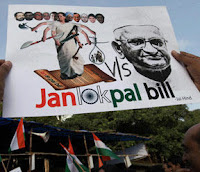 New Delhi: Team Anna's Jan Lokpal Bill is now a household name in India, thanks to the massive support that has erupted in their genuine anti-corruption move. Corruption has united the country, it's evident. Urban middle class is on roads in Anna's support and virtual world too is abuzz with Anna Hazare. Supporters are twitting, sharing links on facebook and other social networking sites, with the sole aim to polularize the movement.

To promote this movement, a team of 12 dedicated individuals have been giving support from behind the scene, who are from different walks of life. The team includes lawyers, media professionals, IT professionals and social activists.

Here's a brief description of a few of those individuals:

Shivendra Singh Chauhan works as a journalist with Navbharat Times. To work full time for the cause, he is on leave without pay from his organization.

Four months into his leave, Chauhan's wife gave birth to a baby boy and in the four days she was in hospital, he could only visit her for two hours. "Yes, she was furious, but that is how it is," shrugs Chauhan.

"Who are you, the people, to ask us, the rulers, how we should govern?"

This, Lal feels, is the motto of the government and says it angers him to his core. The 26-year-old software engineer has been associated with the movement since Anna Hazare's fast at Jantar Mantar in April'11.

He is in-charge of the movement's official e-mail (indiaagainstcorruption.2010@gmail.com). On an average, this e-mail address receives 400-500 mails on any given day.

"I was sending out messages about the Jan Lokpal Bill. My cell phone's auto-correct, however, spelt it as Jokepal Bill," he giggles.

Ever since he got his law degree from the faculty of law in Delhi University in 2009, Kumar has been associated with Arvind Kejriwal's group, Public Cause Research Foundation.

Ashim Jain left his system designer job in Bengaluru to associate with Anna’s movement.
He is also responsible for the India Against Corruption's new IVR system (phone number 9212123212) in Arvind Kejriwal's voice.

Jain is also in charge of building the new website for the IAC. "Since the traffic on the existing site has become almost unmanageable, the IAC needs a new, improved site." Jain says.

So angry is Jain over corruption that in Bengaluru last year, he had wired two hidden video-cameras and two audio recorders to assist the police in exposing a corrupt senior government officer.

"I had done that with the Lokayukta. He was demanding Rs 32,000 in bribes to put a few hundred rupees worth of revenue stamps on court documents," says Jain with a smile.

He is also a member of the Indian Community Activists Network, through which he met Kejriwal.
Posted by sumit at 10:10 PM