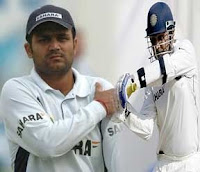 London: India's opening batsman Virender Sehwag made a secret visit to London before the Lord's Test last month to meet his surgeon Andrew Wallace for a shot of injection on his injured shoulder.
According to the reports, Sehwag, who cut short his Indian Premier League (IPL) stint in May to have a torn shoulder blade operated on by Wallace, wanted to get fit for the third Test.
After his last month's secret trip, Sehwag returned to Bangalore's National Cricket Academy where he was undergoing rehabilitation over the past fortnight.
Sehwag will get a first chance to test his shoulder when he along with his opening partner Gautam Gambhir, who missed the second Test with a jarred elbow, will open the Indian batting in the two-day match against Northamptonshire Friday morning at Wantage Road. The duo are on course to make their return to Test duty next Wednesday.
Fast bowler Zaheer Khan is also expected to join them at Edgbaston in a match India must win to avert series defeat. Zaheer pulled up his hamstring on the first day at Lord's and could not bowl in the remaining of the match and was also ruled out of the second Test.
Harbhajan Singh and Yuvraj Singh have already been ruled out of the remainder of the series with injuries.