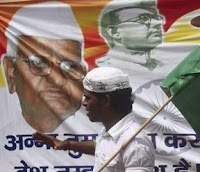 The need of an anti corruption law he said was so urgent that it can not be delayed any more. Corruption is responsible for land grabbing and resources being grabbed the country over. The common man has to deal with it at so many levels that a tough anti corruption law being delayed is a grave injustice.
Darul-uloom issued a statement extending support to Anna Hazare and the movement for an introduction of the Jan Lokpal Bill.
Arjuna Awardee Sportspersons came and lent support. They were accompanied by their coaches.
Anna’s “I am Anna” topi became a fashion statement in fashion shows in Mumbai. From Viday Balan to Sridevi, models and audiences were seen sporting the latest fashion statement - honesty and the Jan Lokpal Bill.
Members of innumerable groups from Kisan Unions, religious groups to market associations came from all parts of the country and lent their voice to the demand for a Jan Lokpal Bill.
(With inputs from PTI, IANS)

Do you think the govt can afford to ignore Anna’s fast for a stronger Lokpal? Share your views with us in the comment box given below...
Posted by sumit at 11:11 AM