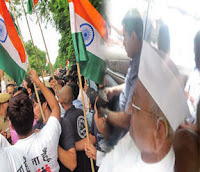 New Delhi: A solution to the Lokpal standoff appeared near with the government having agreed to accept the three contentious demands of Team Anna. Science and Technology Minister Vilasrao Deshmukh said on Thursday: "The government has agreed to all three sticking points."
Deshmukh, one of the mediators between the government and Team Anna, said this to reporters at Lok Sabha Speaker Meira Kumar's Iftar party in the evening.
Deshmukh also said the government would circulate the draft Lokpal bill to the states.
"It would be their (states) decision to adopt it," he said, adding that the government had also agreed to include the lower bureaucracy under the Lokpal.
Deshmukh, a former Maharashtra chief minister, said the citizen's charter, which requires every public authority to publish citizen's charters listing its commitments to citizens, is already in the bill.
Prime Minister Manmohan Singh on Thursday made a passionate appeal to Hazare to end his fast. But the 74-year-old campaigner has refused to end his fast until the three key demands are met.
Deshmukh had met Hazare in the afternoon and then appraised the prime minister about Team Anna's demands.
Read:Vilasrao plays messenger
Anna Hazare, spearheading an anti-corruption campaign, has said he would end his fast only after the government includes the lower bureaucracy within the ambit of the Lokpal bill, appoints Lokayuktas in each state to be under the Lokpal and forulates a citizen's charter for government offices.
His fast entered day 10 on Thursday.
Posted by sumit at 10:08 PM