NRIs in LA march for Anna Hazare's cause 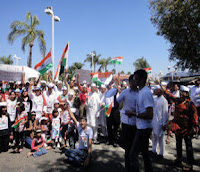 Mumbai: Carrying Indian flags, posters and banners with anti-corruption messages, several hundred non-resident Indians (NRIs) in Los Angeles held a rally to express solidarity with Anna Hazare's movement in their homeland.
According to one of the organisers, Bhairavi Doshi, who is from Mumbai and has been settled there for nearly two decades, the rally was held on Sunday.
"Indians settled or working in the US are supporting this fight against corruption in India. We wanted to let people in India know that we are with you and we will do everything to support you guys. Be strong, we are getting closer and closer to winning this battle," Bhairavi told IANS in an e-mail.
"The participants raised slogans supporting Hazare, who has become a much-admired figure among Indians here," said another participant, Amit Sonpal, who is originally from south Gujarat.
Sonpal said Hazare's crusade against corruption had generated tremendous interest among Indians in the US.
"We are keenly watching the movement on internet, Twitter, as well as through some international television channels beamed from India," he said.
The duo said over the next few days, they plan to hold similar rallies in other parts of the US West coast to drum up support for Hazare's cause.
Hazare has been fasting since Aug 16 for a strong anti-corruption bill and his protest site now is the sprawling Ramlila Maidan in the heart of Delhi.


Related articles
Posted by sumit at 11:39 AM