This parrot from London chatters in Urdu 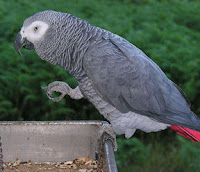 London: A parrot in Britain has learnt to speak in English and Urdu as well after the bird's owner trained him to utter Islamic phrases.
Two-year-old African grey Mittu can say the traditional Muslim greeting 'Asalaam Alaykum' and speak other religious passages meaning in the name of Allah, as well as the more customary "who's a pretty boy?", Daily Mail reported.
According to Mittu's owner Ghaffar Ahmed, his beloved bird can say "come here", "hello, how are you?" in Urdu along with other religious words.
"He (the parrot) speaks Urdu and English. I don't know how many bilingual birds there are in the Britain but there can't be many," says Ahmed, 36.
"My in-laws live in Bradford and a family, who they know, were looking to re-home the parrot as he was becoming too much of a handful.
"They wanted him to go to a home that spoke the same language, so we said we'd have him on board and ever since then he has become part of the family.
"He says a few words including 'Asalaam Alaykum', 'Bismillah', which means - in the name of Allah - and 'Shabaash' - which means well done," he said.
Ahmed tells Mitto likes making all sorts of noises, as this bilingual bird can bark like a dog and make the noise of the refrigerator alarm!
Image: Wikimedia Commons
Posted by sumit at 11:51 AM