Neha Verma: The inhuman face of the Indore triple murder 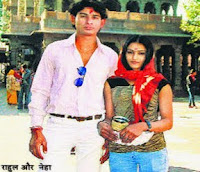 Indore: The cold-bloodedness of Neha Verma, the alleged mastermind in the Indore triple murder case, has emerged in her confession to the Indore crime branch. Neha told the cops that while the women were being ruthlessly slaughtered by her partners-in-crime Rahul and Manoj, she was busy gathering the loot.
According to the police, Neha gave the statement to shift the limelight to the two men by saying that she did not kill Ashlesha Deshpande (24), Rohini Phadke (70) and Megha Deshpande (42 and she only robbed the house.
She stole two mobile phones and ATM cards, and after the women were lying dead in a pool of blood, she took off their jewellery.
Read: Few hours before Neha was giving an exam!
But her merciless and ruthless act of accumulating the loot when the three women were being brutally killed is bound to shock one and all.
A day after their arrests, the three accused were presented before the court on Thursday where they were sent to the police custody till June 30.