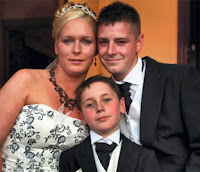 London: A 22-year-old man in Britain who became a dad when he was just 13 years old has finally tied the knot with the mum, a media report said.
Michael Fernandes, now 22, and Cheryl Holden, 24, proved wrong all doubters who said that the relationship would not last.
They married in Manchester, with first son Liam, eight, the best man and second son Bryan, three, a pageboy. Third son Archie, who is one, was also taken along.
Landscape gardener Michael had proposed to Cheryl in 2009 but the hard-up pair could not afford to marry until they won a competition to pay for it and take along 40 guests.
Posted by sumit at 11:50 AM