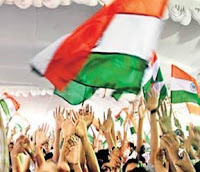 Bangalore: As Anna Hazare sipped tender coconut water at 10am on Sunday at Ramlila Maidan in distant New Delhi, Freedom Park erupted in joy. Hundreds of anti-corruption activists cheered, shouted slogans, waved the tricolour and clicked away their mobile cameras to savour their moment of triumph.

Oscar-winning Jai Ho song reverberated in the park. Nadageete and Jana Gana Mana rent the air. IAC volunteers, students and citizen groups took out a victory rally from Freedom Park. The rally went straight up to KR Circle, and Nrupatunga Road and returned to Freedom Park again. Bikers waving the tricolour and hailing Vande Mataram too were part of the rally.
Former Lokayukta justice Santosh N Hegde, who led the charge from Bangalore, dedicated the victory to Hazare. "It was Anna's call which brought people here. He moved even those who had never ever stood up against any wrongdoing. Anna's struggle not only exposed the electrical representatives but also changed their behaviour. But this is a battle half won."
Justice Hegde also thanked the 39 India Against Corruption (IAC) activists who broke their fast on Sunday. He also had a word of praise for the media, which, he said, had been steadfast in its support to the agitation. Capt GR Gopinath, Ashwin Mahesh and Prithvi Reddy shared the dais with justice Hegde.
Aviation entrepreneur Capt Gopinath, founder of Air Deccan, said, "We should show grace and magnanimity in this victory; this is the victory of democracy and non-violence. For the first time, the MPs came out to listen to their people after winning elections which had never happened during 65 years of independence." On allegations that Anna had put the gun of non-violence to the head of the government, he said: "It has always been a people's movement. This is for a public cause and not to benefit a single person out here."
It was one great achievement for all those 39 people who were still fasting. "Mother India has given us all our lifetime, but this was one chance for us to give her back something that was her right and something she needed. I have lost only about 7 kgs of weight which I will regain. But the country has won a great battle today, which means more to me," said Harish Narasimhamurthy, resident of Sunkadakatte, who was one of the 39 people who ended their fast. Harish quit his job in Modicare for what he said was India's second freedom struggle. "I do not regret it at all. I can get any other job," he said.
Naveen Kumar, a resident of Chitradurga, had come down all the way to Freedom Park to celebrate the victory of the anti-corruption movement.
Social activist Prema Thallapaka, a resident of Richmond Town, was seen distributing chocolates in the park. Asked if it was for Anna's triumph, Prema said it was a day of double cheer for her as her birthday too fell on Sunday.
Prithvi Reddy, IAC volunteer, said, "This movement has achieved two big results — Anna has created an awakening and responsible citizenry in the country. People joined hands without sharing any differences and the victory has been achieved without a single act of violence. Secondly, for the first time in the Indian history, Anna made the elected representatives listen to people."
Reddy said that politicians are now aware that every move of theirs is watched by people, who are not afraid of raising their voice now.
Rajeev Chandrashekhar, member of the Rajya Sabha, congratulated Anna Hazare in a message. "Anna has led us to a new India. His victory represents not just a victory of people's power over entrenched political class — today also represents the victory of idealism over the power clique. I salute the Bangaloreans who protested at Freedom Park. These people have made history and by taking part in this historic movement have become a part of history."
Posted by sumit at 11:29 AM